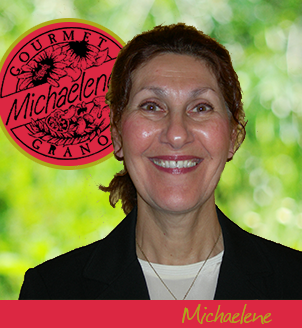 Throughout her life, Michaelene took pleasure in seeing others enjoy her food, but cooking for a living wasn't always in her longterm plans. Michaelene attended college, married and became the proud mother of four children, all girls. She was especially particular about preparing healthy meals for her family.

Mother by day, Michaelene used her education and shared her interest in healthy eating when she became a Lamaze instructor. She urged her pregnant pupils to give up potato chips and cookies as snacks and suggested healthier alternatives. She began to bring her own home-made granola as an example and her students raved. She gave them the recipe so they could make it themselves. She encouraged them to load the granola full of grains, fruits, nuts and seeds, to experience the health benefits for their developing baby and enjoy snacking too. The students complained that their granola never tasted as good as hers, and offered to pay her to bake the granola for them.
Michaelene's family, always her biggest fans, saw the potential in her recipe and encouraged her to take her granola farther than the Lamaze classes. And, that's how Michaelene's Gourmet Granola™ began in 1984.

In the small town of Clarkston, Michigan, Michaelene's first baking facility was a pizza parlor.  While Michaelene ran the office of her new company from her home, she rented the pizza parlor's kitchen during the early daytime hours. Learning to adapt the recipe to "bigger" yields, Michaelene began with just one flavor-"Nutty-Raisin".

When the pizza parlor went out of business, she found a bakery to rent. One evening a week, she would bake granola until the early hours of the morning. When orders demanded more of her time, Gourmet Granola became more than just Michaelene's on-the-side business. As the business grew more than she had ever imagined, Michaelene opened her own bakery and began to expand her product line. Today, Michaelene's first granola flavor has spawned 21 other varieties and two flavors of granola cookies.

Products
MICHAELENE'S, INC. products include 21 varieties of Gourmet Granola, Sweetnola and two kinds of Granola Cookies. MICHAELENE'S GOURMET GRANOLA™ appeals to a wide range of customers because it can be eaten for breakfast with or without milk, hot or cold, or as a delicious snack right out of the bag. 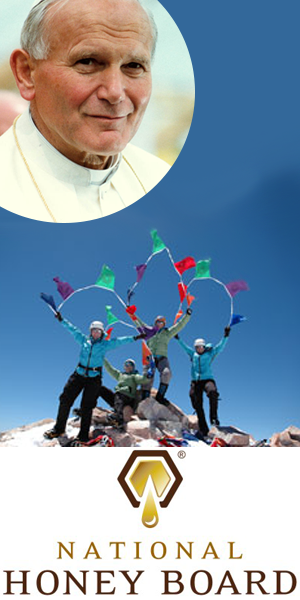 Services
In business since 1984, Michaelene's Gourmet Granola™, a family owned company, prides itself on high standards of quality, variety, and prompt courteous service. Michaelene's does not aspire to be the "biggest", rather, wants ot be known as "the best" granola available.

Special Honors
When Saint John Paul II made his visits to New York and Baltimore in 1995, Trans World Airlines called Michaelene's because they wanted to serve Gourmet Granola on Saint Pope John Paul II's return flight to Rome. A TWA representative had tasted Michaelene's Gourmet Granola at a recent Fancy Food Show in New York and requested for the Pope, to have the best breakfast possible. His favorite was the Apple-Raisin Granola with cream.

MICHAELENE'S GOURMET GRANOLA™ received the 1994 award for the Best Honey-Sweetened Cereal by the National Honey Association.

MICHAELENE'S GOURMET GRANOLA™ has been the fuel of choice for mountain climbing expeditions to some of the tallest mountains in the world and for special causes such as the Climb Against Breast Cancer.